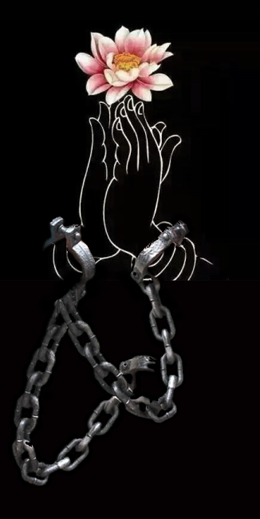 My statements and confessions

（1）Regardless of the result in the trial of this case, it will greatly impact Chinese judicial circles, Buddhist circles and religious circles worldwide, and make a great impact  on  history. Inevitably it will become a case to be examined by history. The chief judge, adjudicator, public prosecutor, attorneys and even our defendants of this case will be the witnesses and participants of this historical law case. With this in mind, serving as defendants, we must play this role well to go through the demanding examination from Buddhism, Society and even family members of our contribution or not to history.

（2）As for this case, one year has passed since I was detained as a criminal till today’s judgment; so far, I still have no idea how my practice of Buddhism to advocate Global “F & D” and “Citizen mutual love” programs for public welfare etc., and my action of leading numerous disciples to broadly practice Buddhist virtue and benefit human beings, have anything to do with “organizing and making use of evil cults to destroy the implementation of law” of which I am accused by the public prosecution organ? Buddhism is “the education of Buddha”, not the traditional meaning of “religion”; whatever the Sangha system of collective Monasteries or other forms of Buddhism taken by lay Buddhist, as well as realization by attainment of the Heart Intuitive Dharma, are all just the self-cultivation in inheritance method of Buddha. Buddhism is not a form of organization to control its members’ social activities or body and mind, therefore there are no organization activities to “organize and make use of evil religion to destroy the implementation of law”.

During the investigation of this case, the Investigation Organ through showing my disciples, who were detained like me, an “improper photo” not yet presented in court  from an unknown source and the “sexual relationship” material fabricated by an unknown “passerby” in early 90s of the last century without any legal proceedings to be confirmed, vilified me as a shameless person guilty of fraud and rape, demoralization, avarice and lust, that caused the faith of those imprisoned disciples to collapse suddenly. Then the Investigation Organ by using the “tricking and threatening” method (enticement, deception and coercion), made some female disciples who were physically and mentally bruised while in custody to fabricate facts and distort the truth to smear and accuse me of having “Tantric sex (masculine and feminine in sexual union)” relationships with them.

Even though the codefendant in this case, Meng Yue孟越, stated clearly in her confession that Hua Zang Dharma does not advocate “Tantric sex” and that I told the disciples that exploring their conscience alone should make clear that “Tantric sex” is forbidden, the Investigation Organ still inveigled and intimidated her to confess she had a “Tantric sex” relationship with me. The Investigation Organ even inveigled and intimidated my relative,my nephew´s wife, Yuan Ming袁明 to violate familty ethics and morals by fabricating facts to “expose and criticize” me, and let Yuan Ming cooperate with the Special Investigation Group to “persuade” those female disciples in custody. At the same time, the Investigation Organ including Public Prosecution provided me with their “statement materials” to trick and trap me into a confession with many times “promise”. I believe that in the near future, those people who were detained for long time, physically and mentally bruised, coerced into committing perjury, even lodging false accusations against me, will give the truth to the world, return me a justice with their conscience!

I also believe that in the not too distant future, Song Shan Saolin Monastery will resume “Yong Hua Patiarchal Hall”, the lineage of the Orthodox Dharma of Buddha, It will protect the country and bless the people, and Mahayana Buddhism will make order out of confusion!

（3）During the trial proceedings of this case, two wonderful scenes were missed: Firstly,

no witnesses who are able to prove my inheritance identity of Mahayana Heart Intuitive Dharma were allowed in court to testify to my inheritance identity；Secondly, no eminent and virtuous Buddhist monks of worldwide Buddhist circle were allowed in court to cross-examine my Stages of Buddha Dharma Meditation and to cross-examine the true or false, right or wrong, good or evil on Buddhism doctrine of “understanding, enlightenment, practice and testimony”; which are the fatal flaws in this case. For the reason that just relying on those persons who don’t understand Buddhism and Dharma can’t give a right or wrong and good or evil conclusion on a buddhist´s realization of the practice of Buddhism!

If the court applied these two procedures, I believe the court would see that I brought “paramartha-satya” of Mahayana Buddhism which was hermitic since The Southern Song Dynasty to reappear in the Buddhist circle, and for the first time in Buddhist history brought Buddhism doctrine to society as “Enlightenment Teaching”, which was recognized by “Christian Solidarity Worldwide, Catholicism, Judaism, Islam and Eastern Orthodox”; and opened religious dialogue to defuse extreme belief contradiction, accordingly opened new religious order to initiate religious dialogue, coexist peacefully, and promote religion to serve society, country and human beings. On this basis, I devoted myself to unite five religions in China, led four divisions of disciples to carry the burdens of country, to bring welfare to people, to harmonize people, to pacify society, and take the goal of “Build a Pure Land on the human planet and promote world peace” as mission. We are the Buddhist Practitioners who widely preach the Buddhist truth in society to benefit people and construct society,  we don’t have any action harmful to society and people!

Buddhists regard patience under insult and suffering as the supplying soul, and regard self-less and wisdom as liberating. The essence of this trial is the judgment on Buddhism in its entirity; because Hua Zang Dharma is exactly the Patriarch of ecumenical Buddhism, is the ecumenical Patriarch of Heart Intuitive Dharma of “Tathagata-garbha, Empty Tathagata-garbha, Emptyless Tathagata-garbha,and Empty-Emptyless Tathagata-garbha ”, which is the right belief and refuge on the stages of Meditation for any Buddhism denomination and Buddhists. Unfortunately I can’t expand to explain the “paramartha-satya” of Buddhism in court. It is a great pity that the court defines HuaZang Dharma as good or evil, and a great pity for instruction of the Buddhist  in the practice of meditation! The codefendants in this case- MengYue and Zhao Weiping are practitioners who practice Buddhism in society, if there is anything wrong during the process I led them to practice Buddhism, it is my fault, they didn’t have any ability to control my behavior; they are innocent, they just practice Dharma and should not be incriminated because of it. The codefendant Yuan Ming, just like her statement that she didn’t believe in Hua Zang Dharma at all, and she was not involved in any Hua Zang Dharma affairs; during  the investigation period, she “proactively cooperated“ with the organ of investigation to do plenty of “persuasion” jobs on the  other codefendants in custody, and even did so “exposing and criticizing” me, therefore she shall not be incriminated together with Hua Zang Dharma and me!

（4）In the so-called accusation of rape, the Investigative Organ arrested the “victims” first, then showed them a so called “improper photo” of me with one of the victims which was never presented in court, therefore inveigled and threatened the “victims” to make contradictory confessions.  In this way, they first smeared Yin and Wang by claiming they engaged and cohabited with me, then expanded that to claim I cheated them into “Tantric sex”, then conducted rape, and they distorted the misunderstanding of Yu Xiaoting that I threatened and raped her too. The confessions of all those “victims” are almost identical, the wording also almost exactly the same.

In the statement of these “victims”, there is nothing in common with “Tantric sex (masculine and feminine union of emptiness and bliss)”. Specially in their repeated often conflicting statements and confessions, the evolution is also almost the same, “from denial to willingness, till being enticed to do ‘Tantric sex’ ”. From which we can see how they were tortured physically and psychologically so that they made such fake statements against their will!

When the Investigative Org interrogated me, they inveigled that “admitting the sexual relationship does not mean `rape`, nobody says you committed `rape`. They have already confessed that you had sexual relationship with them, if you do not admit that, that will not be good for them or you.”  (There are synchronous sound and video recordings of the interrogations as evidence). In consideration of those so called “victims” who I would not like to suffer more physical and psychological torture, I would really like to see that they can be set free soon, therefore I admitted this crime against my will. As for the sexual relationship with Meng Yue、Ren Huining and others, it does not exist at all, we do request the court to investigate and verify this.  (My lawyer and I requested that those “victims”  testify in court, but the court rejected this request illegally).

（5）In the accusation of economic fraud, I never demanded the money or materials  from anyone by any means, not to mention the so-called “fraud”. The Prosecutor   Organ accused me of “fraud” because of the reciprocal giving and receiving of presents，even give a treat between the teacher and student, among the friends and relatives; because of the contractual relationship with the customers of the Buddhist Instrument Store who purchased by their own will, and they bought my calligraphy by their own will that I have no profit; and because of my disciples who bought the ebony seal by their own will. Moreover, the related persons above stated clearly that they don´t think I cheated them, they purchased by their own will. Even though there are no “victims”, the Prosecutor Organ still accuse me of fraud.

（6）On “The accusation of producing and selling poisonous and harmful food”, I contributed the ancient secret prescription of Zen Medicine of our Dharma to the secular world , aiming to improve the body and mind health of the people. The Radix Aconiti Preparata 制川乌, Aconitum carmichaelii 附子 and Asarum sieboldii Miq 细辛 are a very very small percentage of the prescription without any poison, moreover these 3 medicines are not cooked in the food directly and the food just imbibes some of the medical smell and Qi. Therefore the ingredients are good for the rehabilitation of people in poor health, without any poison.

Second, the examination of the secret recipe should be done on the whole recipe, and not by picking out only 3 of the medicines for examination.

Third, the medicinal food is only served to people in poor health, not to all the customers.

In conclusion, the medicinal food produced by Shen Zhen Pu hua Catering Co., Ltd does not have any poison.

After the trial of this case, regardless of whether the people know Vairocana Xing Wu as the one who turns  up the  great wheel of the Dharma, or as a  martyr; also whatever the outcome of the trial, I would thank the collegiate court , the prosecutors and the lawyers for accompanying me during these days. thank the secular beings for giving me the supplies which made me enlightened! Thank my disciples for accompanying me to pass the arduous times！